Looking for a New Life 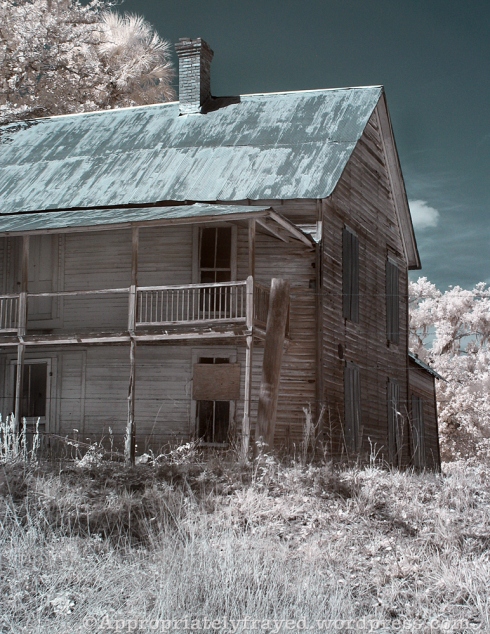 An old two story farmhouse sits along the roadside in central Florida. At one time, it must have been quite a home , the clues are in the ornate trim and that it has two stories.Caged behind a barbed wire fence, it cries out to be preserved. I dressed it in spring colors to help its appeal. I’d love to peek behind its shuttered windows and learn more of its story.

Refound Images – View Through the Window

Another refugee from the hard drive crash. This photo was shot through the window of one of the few Victorian houses remaining in Memphis. Slated to be restored, it waits silently for its fate. The photo has undergone a bit of transformation in this newer version. I gave it a more ethereal, softer, and out of time look. I hope this majestic home remains safe.

It’s so easy to drive past malls, fast-food restaurants and discount stores, listening to music or talking on the phone. It’s easy not to notice what is really along the side of the road, pieces of who we were.Each of these photos sits along the roadside of a busy road. Four-lane or six-lane  traffic streams by and they remain , watching, until new stores or gas stations threaten to devour them.

Maybe we need to take a closer look.

Oxen on the Side of the Road, the Art of E.T.Wickham

Just west of Clarksville,in Palmyra, you turn onto an old county road and on the side of the road stand a huge pair of concrete oxen. They are the remains of the work of E.T. Wickham.

Hurriedly parking the car, you grab a camera and can’t wait to explore. There’s maybe an hour’s light left and a storm is moving in. First you come upon a headless horsemen , a pair of legs with a bomb, and a pair of shoes that represent Patrick Henry.

Off in the woods is a man riding a longhorn bull. This is Wickham’s self-portrait. You try to imagine what they might have looked like full-formed and in color as they were in 1970. 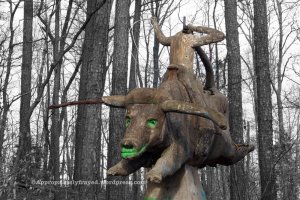 Today, they are weather-worn and assaulted by man. Bullet holes, missing heads and limbs, as well as graffiti mar the surface and make me embarrassed by the actions of others.

Directly across the road, you spy an arched gate strangled by vines and just beyond is a two-room, tin-roofed cabin.Covered in graffiti, you can still see the bright colors beneath the words. There is no door. Upon entering you find a tiny living area to the left. The stone fireplace and mantle have been destroyed. A tiny sink is molded in concrete into the corner wall.Across the hall is a room that might have held a narrow bed.

For eighteen years, Wickham and his wife shared those two rooms as he created his sculptures. Originally he surrounded the cabin with religious pieces and placed two dog statues at the sides of the gate.The only sign of any of these pieces is a moss-covered base beside the cabin.

Making our way through the thicket and back across the road , we returned to the historic sculptures. You can read the inscriptions on the bases which include Andrew Jackson, both Kennedy brothers, Estes Kefauver, and PatrickHenry. Further back in the woods, we came across bases for at least eight other statues  buried in leaves and moss.

Further down the road, we turn onto Oak Ridge and find five more statues facing the road and protected by a fence.We pull up in front of a log cabin and run to shoot more photos. The light is fading as we find an ox head, two men shaking hands, and another headless rider.

As I’m hoping the light and my batteries don’t run out, two dogs come racing up to us. We remember to smile through the fear and they are friendly. Although I felt that I could remain there shooting, it was time to go. Walking back to the car, we meet Sandy Evans, Wickham’s great-granddaughter who lives in the log cabin.Graciously she answers our questions and said that she’d had the statues moved to protect them. Difficult to move, she explained that they haven’t been able to replicate Wickham’s concrete mixture so repairs are nearly impossible.The armatures and textured wire supports are visible in many places and you can see the variety of found and donated  materials that E.T. Wickham used to create his art. 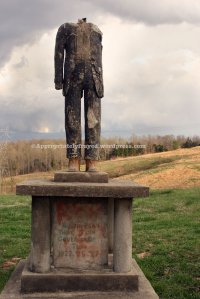 Wickham devoted eighteen years of his life , between 1952 – 1980 to creating the fifty historical and religious figures that lined the road and formed a park.He and his wife raised nine children and when they were grown, Wickham built the two room cabin that they moved into so he could begin his work.

At the time, neighbors and family were of varying opinions, but prominent figures such as General Westmoreland and Estes Kefauver attended dedications for the pieces.

The second piece that Wickham created was an angel with nail pointed wings to stand over the grave of his son lost in World War Two. Three stones stand there, his wife’s and his own flank their son’s.

We left with many more questions and the sense that something needs to be done to preserve Enoch Tanner Wickham’s legacy.

Thanks to an exhibition catalog published by the Customs House Museum and Cultural Center in Clarksville,TN, I was able to see photos of what the area looked like in the 1970’s. I wish I could time travel.

The sun is shining on the first day of our road trip. Driving east on Route 70, the speed is fast and the anticipation high as our eyes search the roadside for photos.We slow for a road crew and the signalmen is wearing a black and white striped uniform. Transported in time, I reach for my camera as my friend slows way down. Shooting through the open window, I take two shots ,but for the next miles all we can hear is bluegrass music and think about “O Brother Where Art Thou? “As a throwback to the 30’s, the uniform fits our desire to shoot the old and  abandoned , but it feels so backward and out-of-place.

Continuing down the road, we reach Hollow Rock, Tennessee. The Main Street business district of one block is deserted. Needless to say, we spent some quality time shooting the remains.

It’s sad to see buildings and their towns end up in this state.

Later that night,  I checked online to find out more about the striped uniforms. I learned that I am sadly out of date about jailhouse fashions. I think this is probably a good thing for an elementary school teacher.Although the uniforms were first discontinued by New York in 1904 because they were humiliating, they remained in use until the 1930’s through most of the country and  abolished when they became too expensive. Recently,  counties across the country are re-introducing the striped uniforms as a way to make inmates more easily distinguishable from the public.

Maybe too many people have adopted the orange jumpsuit look and I just didn’t notice, but I can almost see the striped pants or tops lending themselves to a retro fashion statement embraced by designers and teens.

While I , and many others, love to look backward to preserve what was good and beautiful,perhaps the county law enforcement agencies will look forward to create new ideas and solutions. Meanwhile, I can just hear “Man of Constant Sorrow.” 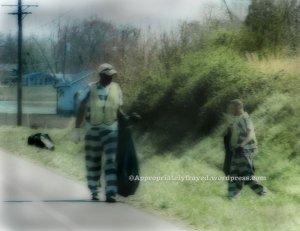