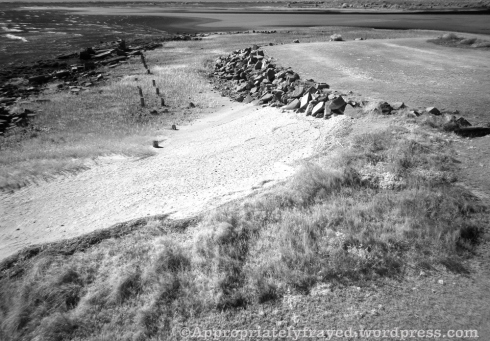 A rocky outcropping of beach, the sun is shining and it’s oddly silent. Sitting in Charleston Harbor this little island  looks peaceful until you take a broader view and see the remains of the fort. Until you wander the ghostly maze  of ruins and can almost hear the voices and booms of cannons. Until you realize this is the site of the opening act of the bloodiest , most confusing time in our country’s history, The Civil War. This is Fort Sumter. Growing up in the north and living in the south, I have come to hear so many personal reactions to the war. Currently in Memphis, they are actively working to rename parks that honored Confederate generals. At reenactments at Shiloh, the Star-Spangled Banner isn’t heard, but The Bonnie Blue Flag and Dixie are sung lustily. Both events are unsettling. My hope is that the serenity of this small sunlit beach will spread to others , that peace rather than conflict will finally prevail, and the “War”  will have truly ended 148 years later.

I am a native New Yorker , transplanted to Memphis, who is a photographer, teacher, and wanderer. I am inspired by the beauty and stories that resonate from abandoned places and found objects. END_OF_DOCUMENT_TOKEN_TO_BE_REPLACED
This entry was posted on Thursday, April 4th, 2013 at 7:27 pm and tagged with beach, Bonnie Blue Flag, Charleston Harbor, Confederate States of America, digital photography, Dixie, Fort Sumter, inspiration, peace, photography, photos, serenity, Star Spangled Banner and posted in Inspiration, Photographs. You can follow any responses to this entry through the RSS 2.0 feed.
« A Recipe for Creativity
Imagination Sets Sail »

4 responses to “Appearances Are Deceiving”